Publication
Art Loss in Iraq: An Update
— The Editor
The following are edited transcripts of two talks and Q&A from an IFAR Evening, October 28, 2004


An Overview of the Losses
— John Russell
Russell, an expert in Near Eastern antiquities, and Advisor, Ministry of Culture, Coalition Provisional Authority, describes the damage to the Iraq Museum and archaeological sites in Iraq that he viewed first-hand in the immediate aftermath of the war in Iraq. Article includes 16 images.


Training Iraqis for Heritage Preservation
— B. Burnham
Burnham, President of the World Monuments Fund, describes a joint project of the Fund and the Getty to train Iraqis to document and preserve their cultural heritage in face of the recent devastation from the Iraq war.


Authenticity: Introduction: The Curatorial Perspective
— Katherine Ware
Ware, curator at the Philadelphia Museum of Art, discusses the growth of the museum’s photography collection.


Authenticity: The View From the Auction House
— Denise Bethel
Bethel, Director of Sotheby’s Photography Department, presents the challenges faced by an auction house trying to verify the authenticity and vintage of a photograph.


Authenticity: An Inquiry into the Fate of Man Ray’s Negatives and Studio Stamps
— Steven Manford
Manford, who is working on the catalogue raisonné of Man Ray’s Rayographs, discusses the problems created by the proliferation of posthumous Man Ray prints and vanishing negatives.


Authenticity: Materials Analysis of Photographic Paper
— Paul Messier
Messier, a conservator of photographs and works on paper, discusses in detail analytical tests he performed on the photographic paper of questioned works by Lewis Hine. This includes tests for paper fiber analysis and optical brightening agents.


Authenticity: A Photography Dealer’s Perspective
— Peter MacGill
MacGill, President of Pace/MacGill Gallery, discusses issues of connoisseurship and provenance research as they relate to collecting and selling of photographs.


Authenticity: A Collector’s View
— Richard L. Menschel
Menschel outlines his experiences as a collector of photographs, describes the changes in the field since he began collecting, and offers advice to photograph collectors.


News and Updates: Security Upgrades Close Munch Museum Until Summer
— Sharon Flescher
Following the yet unsolved theft of Munch’s The Scream and Madonna from the Munch Museum in Oslo, the museum has been closed for a reevaluation and update of its security.


News and Updates: AAMD Publishes Guidelines for Museum Acquisition of Antiquities
— Sharon Flescher
A summary of the Association of Art Museum Directors (AAMD) new guidelines on the “Acquisition of Archaeological Materials and Ancient Art,” published in June 2004.


News and Updates: Author on Iraq Sentenced for Smuggling Looted Iraqi Artifacts into the U.S.
— Sharon Flescher
Discusses the case of Joseph Braude, the first person sentenced for trying to sneak stolen artifacts from Baghdad into the U.S. He is an author on Iraqi history and current affairs and was caught attempting to bring three cylinder seals into the country.


News and Updates: IFAR Receives IMLS Grant for Art Law Website Initiative
— Sharon Flescher
IFAR has been awarded a National Leadership Grant to fund the transformation of its website into an information resource with its Art Law/Cultural Property Website Initiative.


American Owners Restitute Nazi-Looted Drawing to Feldmann Family
— Sharon Flescher and Gertrude Wilmers
IFAR was the intermediary for the return of The Liberation of St. Peter from Prison, a drawing attributed to Rembrandt. The work was looted during the Holocaust and was returned to the Feldmann family although no request for its restitution had been made. 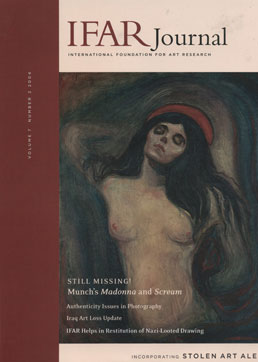